Tom Slade was raised on Carter Street, exactly 200 yards from the doors to Saginaw High School where he excelled in football, basketball and tennis. He earned All-State honors in football as a strong-armed quarterback and an accurate kicker for the Trojans. After graduating in 1970, Slade fulfilled his childhood dream when the University of Michigan awarded him a scholarship to play football under legendary coach Bo Schembechler. As a sophomore in 1971, Slade helped lead the team to an undefeated 11-0 regular season. The Wolverines narrowly missed a National Championship that year, losing the ’73 Rose Bowl game 13-12 on a late field goal by Stanford. Slade was known for being a tough run-blocker who cleared the way for Billy Taylor and other Wolverine running backs after he handed the ball off. After graduating from U-M, Slade returned to attend the U-M School of Dentistry and received a Doctor of Dental Surgery degree in 1978. He taught at the U-M School of Dentistry for three years before starting his own practice in 1981 in nearby Ypsilanti Township. Schembechler was one of his dental clients. He would later become the dentist for the Eastern Michigan University athletic teams. Slade also worked as a color analyst for Michigan football broadcasts on radio station WUOM-FM. In his spare time he was a Michigan High School Athletic Association basketball official and officiated numerous state finals. He also served as a Big Ten and Mid-American Conference women’s basketball official. He was active in the Ypsilanti Area Chamber of Commerce and served a three-year term as the president of the EMU Baseball “Dugout Club.” In 2004, he was inducted into the Saginaw County Sports Hall of Fame. The previous year he served as keynote speaker at the hall of fame’s annual induction banquet. In 2005 Slade was diagnosed with leukemia. In June of 2006 friends and former U-M teammates, including fellow Saginaw High and Michigan alum Calvin O’Neal, helped organize the Tom Slade Bone Marrow Donor Registration Drive to help find marrow donors for Slade and others with leukemia. Slade remained extremely close to Schembechler. The coach sent weekly notes and frequently called and visited after Slade was diagnosed with leukemia. During a particularly difficult day in the hospital Slade woke up to see his former coach sitting in a chair against the wall. They looked at each other but said nothing and Slade fell back to sleep. When he awoke again five hours later, Bo was sitting in the same chair, looking right at him. Slade died on November 12, 2006 in Ann Arbor at age 54. Though Schembechler was ailing himself, he attended Slade’s funeral. That night, Bo delivered his traditional Thursday night pep talk before the Ohio State game. According to the Detroit News: “Bo’s speech was not about Ohio State, the Big Ten title or a national championship. The whole speech was about Tom Slade and how, if the players worked hard, listened to their coaches and stuck together as teammates, one day they might be as good a Michigan man as Slade. That was the goal at Michigan, not national championships.” The next morning, Schembechler collapsed and died of heart failure before taping his weekly television show. 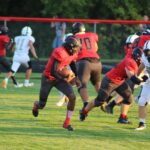 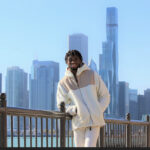 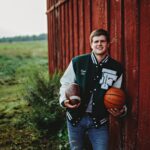 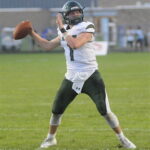 For information on how to apply for the Saginaw County Sports Hall of Fame scholarship,
please contact the Saginaw Community Foundation at (989) 755-0545 or Click Here