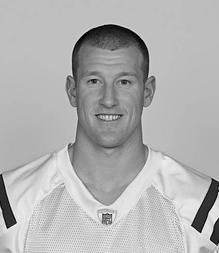 Blair White was an outstanding football, basketball and baseball standout at Nouvel Catholic Central High School. In basketball, he was a two-year starter at guard and averaged 16 points and 10 rebounds his senior year. White earned three letters as a pitcher/first baseman for the Panthers and collected All-District, All-Region and second team All-State honors his senior year. White was a member of Nouvel’s 2005 Division 3 state champion team as he delivered two hits in four trips and scored a run as the Panthers snapped Homer’s national-record 75-game win streak. He tossed a two-hit, complete game in Nouvel’s win over Leroy Pine River in the semifinal contest. He excelled on the gridiron where he was a two-year starter at wide receiver. White nabbed honorable mention All-State honors from the Associated Press as a senior when he hauled in 63 receptions for 800 yards (12.7 average) and 10 touchdowns. He was a walk-on at Michigan State University, where he was red-shirted his first year. He became an important player on the scout teams and was rewarded with a scholarship for his final two seasons. The 6-foot-2, 200 pounder wound up playing a major role in MSU’s offense both seasons. He led the team in receptions (43) his junior year and ranked second in receiving yards (659). For his efforts, he earned MSU’s Biggie Munn Award as the team’s most inspirational player. As a senior, the Spartan co-captain had 64 receptions for 876 yards and nine touchdowns. White earned first team All-Big Ten honors by the coaches and second team by the media. He was the recipient of MSU’s Downtown Coaches Club Award for most outstanding senior offensive player. He finished his Spartan career ranked among MSU’s all-time leaders in receptions (12th with 116), touchdown receptions (15th with 10) and in receiving yards (16th with 1,674). He played in 40 career games with 18 starts. White became just one of only 14 players in program history to earn first team Academic All-America honors and Academic All-Big Ten accolades all four years of his college career. He was named one of 12 finalists for the Wuerffel Trophy, presented to the college football player who best combines exemplary community service with outstanding academic and athletic achievement. At the East-West Shrine Game he led all receivers with seven receptions for 93 yards. White was signed as an undrafted free agent by the Indianapolis Colts in 2010. After spending the first few weeks on the Colts practice squad, he was elevated to the active roster and scored his first NFL touchdown in his NFL debut against the Denver Broncos. He finished the 2010 season with 36 receptions for 355 yards and five touchdowns. In 2011 White played in seven games, but was hindered by back injuries. In limited action he returned seven punts for 22 yards. White was forced to retire from pro football in 2011 at the age of 25 after his third low back surgery.