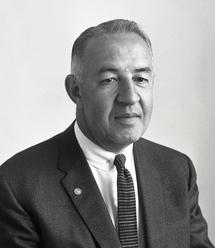 Carl “Jack” Bauer Jr. was born May 18, 1908, in Saginaw. He earned nine varsity letters as a standout athlete in football, basketball, and baseball at Arthur Hill High School. Bauer was also captain of the Letterman’s Club, president of the Booster Club, class treasurer, and the Legenda’s editor-in-chief. The 1926 graduate would go on to play one year of football as a member of Alma College’s MIAA championship team. He later played three seasons at the University of Michigan, alternating between guard and tackle, under two coaches – Tad Weiman and Harry Kipke. In 1931, Bauer graduated from Michigan with a degree in engineering. That same year he began a distinguished 30-year officiating career where he worked football and basketball games, including the Michigan High School Athletic Association finals in basketball. Bauer worked his way through the ranks from Class D high school football games, then C, B and A games, before officiating MIAA and Mid-America Conference contests. He was the head official of the first nine Red Feather football games. In 1942, Commissioner Tug Wilson named Bauer to the Big 10 officiating staff. He was employed as a professional engineer and later as a manufacturer’s representative, but was widely known throughout the Midwest as one of the finest Big Ten gridiron officials. During his 15 years as an umpire in the Big Ten (1942-57), he officiated from coast to coast, working in all sections of the United States in non-conference games. He also worked the Cotton, Sugar, and Orange Bowl games, and his career was highlighted when he umpired the 1955 Rose Bowl game between Southern California and Ohio State. In 1958, at the age of 50, National Football League Commissioner Bert Bell appointed Bauer to the league’s officiating staff. Bauer worked three seasons in the NFL before retiring from officiating in 1961. Bauer was a member of First Congressional Church, the Saginaw Club, Saginaw Country Club, the Michigan Society of Professional Engineers, and the National Society of Professional Engineers. In 1977, he received the University of Michigan’s Distinguished Alumni Award, and was posthumously inducted into the Arthur Hill Letterwinner’s Hall of Fame in 1980. Bauer, who passed away September 7, 1977, at the age of 69, is entombed at Oakwood Mausoleum.