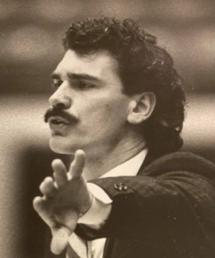 George Kubiak played basketball, football and ran track at Carrollton High School from 1967-1970. He was on the track team where he qualified for the state meet in the mile run and earned All-State honors as a senior. In football, George was a three-year varsity letter winner where he earned Saginaw News All-Area honors as a wide receiver his senior year while also garnering All-State honorable mention honors. However, it was on the basketball court where he truly made a name for himself. George scored over 1,000 points in just two seasons on the varsity for the Cavaliers and was named to league and All-Area honors both his junior and senior seasons. Additionally, the 6-foot-3 forward captured All-State laurels both seasons from the Associated Press and the United Press International, as well as the Detroit Free Press his senior year. That season (1969-70) he averaged 25.5 points and 10 rebounds and helped lead Carrollton to a sparkling 25-1 record. The Cavs’ only loss came in the Class B state championship game where they were upended by River Rouge and legendary coach Lofton Greene, 76-66. George was named to the Midwest Regional High School All-America team as an honorable mention selection. The Basketball Coaches Association of Michigan began conducting the Mr. Basketball voting in 1981. In 2010, the BCAM began a 10-year project to honor the top high school senior boys’ basketball players from the period prior to the inception of the Mr. Basketball Award, naming it the Retro Mr. Basketball award. George was the Retro Mr. Basketball runner-up in 1969-70 to Rick Drewitz of Garden City West High School who would go on to play for Kentucky. George received a basketball scholarship to Central Michigan University, where he was the leading scorer on the Chippewas’ freshman team (17.5 points-per-game) before winning three varsity letters from 1972-74. During his senior year he averaged 5.3 points, 3.0 rebounds and 1.0 assists per games. George taught in the Saginaw Public Schools for 40 years and coached varsity basketball at Arthur Hill High School from 1978-96. He carved out an impressive 261-141 record at Arthur Hill and in 1988 was the All-Area Dream Team Coach of the Year. In 2014, George was recognized among Michigan’s Top 100 players of all time, ranking 101st and an honorable mention selection. He is now retired from teaching and enjoys playing golf.