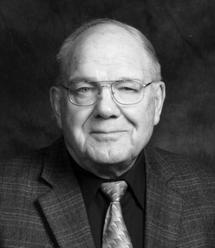 Loren Dietrich was born in Saginaw and was a stellar lineman in football from 1947-48 at Arthur Hill High School. The 6-foot-1, 195-pounder earned Class A All-State honors his senior year for the Lumberjacks, and was named to Arthur Hill’s all-time football team. Dietrich also played two years of varsity baseball for the Hillites before going on to Central Michigan College where he was a three-year starter on the offensive line for the Chippewas. He earned All-Conference honors in both 1951 and 1952, and was Central Michigan’s first-ever Most Valuable Player in football. Dietrich coached football at Chesaning, Owosso, Scottville and Eaton Rapids, before going on to teach and coach at Michigan Lutheran Seminary High School in Saginaw from 1969-94. He racked up a solid 144-83-3 record in his 25 years coaching the Cardinals’ varsity football team. His Seminary teams made the playoffs six years under his helm and the Cardinals won the Class D state championship in 1986 with a 36-24 victory over Fowler at the Pontiac Silverdome. In doing so Michigan Lutheran Seminary became Saginaw County’s first state champion in football since the state playoff system was enacted in 1975. Dietrich was named the Michigan High School Athletic Association Class D Coach of the Year in 1986, and was elected to the Michigan High School Football Coaches Association Hall of Fame in 1989. He coached his two sons, Joe and Mark, and watched grandsons, Caleb, Tom and Stephen, play football at Michigan Lutheran Seminary. Additionally, Dietrich coached baseball at Seminary for 11 years, girl’s track and field nine years, and boy’s track and field two years. The 84-year-old Dietrich was inducted into Arthur Hill High School’s Letterwinner’s Hall of Fame in 1994.