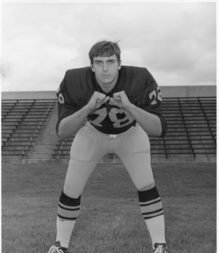 Paul Walderzak was a solid three-sport athlete at Arthur Hill High School, where he graduated in 1974. He wrestled for one season and participated in track and field for three years, throwing the shot put 56-6 his senior year – winning the indoor meet at Central Michigan University. Walderzak played football for three varsity seasons at Arthur Hill and the 6-foot-3, 245-pound offensive tackle was a key member for the Lumberjack’s Class A state championship team in 1973 that went undefeated and unscored upon. He was named All-Saginaw Valley, All-Area, and All-State by United Press International. Walderzak received several scholarship offers before accepting a full-ride athletic scholarship to the University of Nebraska. During his time playing for Nebraska, from 1974-77, the Cornhuskers finished in the top 10 twice and spent time as the No. 1 ranked team in the nation. After turning down an offer from the Hamilton Tiger-Cats of the Canadian Football League, he went on to coach football at Standish-Sterling Central High School for 32 years. During that time, he racked up a record of 175-128-1, with six league titles, 11 playoff appearances, three district titles, and one semifinal finish when the Panthers finished 12-1 in 2008. Walderzak was named Associated Press Coach of the Year for Division 5-6 in 2013. Additionally, he was named the Michigan High School Football Coaches Association’s Regional Coach of the Year five times. He is entering his 38th year of coaching track and field, and his teams have produced state qualifiers in the throwing events 26 times – including six state champions and one state record holder in the 400-meter dash. Walderzak has continued to compete in Masters power lifting and track and field events, with eight state championships in the discus and throwing a 16-pound shot. In 2004, he placed third nationally in the shot put, and was named a Masters All-America at the age of 49. He was inducted into Arthur Hill High School’s Letterwinner’s Hall of Fame in 2005, and elected into the Michigan High School Football Coaches Association Hall of Fame in 2011.