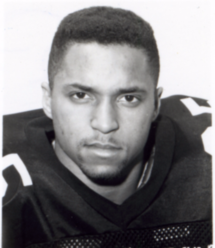 Tony Jackson had a splendid prep career at Nouvel Catholic Central High School, participating in basketball, football and track and field, earning eight varsity letters. He was on state championship teams in both basketball and track for the Panthers, and captured individual state titles in the 100 and 200 meters both his junior and senior seasons. His top time in the 40-yard dash was a blistering :4.3, and 10.7 in the 100-yard dash. However, Jackson was best known as an explosive running back in football where he earned All-State and All-America honors. When he graduated in 1989, he held school records for career touchdowns with 75 and rushing yards with 4,649 in his three standout years. He received several scholarship offers and decided on Vanderbilt University where he was a two-year starter at tailback. Jackson’s career statistics include 1,532 rushing yards on 313 attempts for a 4.9 rushing average. He chalked up seven rushing touchdowns and his longest run was a 69-yarder against Duke in 1993. Jackson also hauled in 44 passes for 336 career receiving yards. He gained over 100 yards rushing four times, and his single-game rushing high was 128 yards against Navy in 1992. He twice led the Commodores in single-season rushing yards with 652 in 1992 and 607 in 1993. Jackson is Vandy’s career leader in kickoff return average with 23.6 yards. He ranks second all-time in kickoff return yardage with 2,004 yards, as well as total kickoff returns with 85. Jackson has the second longest kickoff return in Vanderbilt history with a 97-yard jaunt against Duke in 1992. His 24.8-yard kickoff return average, also in 1992, is the second-best ever by a Commodore football player. He also ran track for Vanderbilt and finished second in the NCAA in the 60-meter dash. The 5-foot-8, 176-pounder bench pressed 375 pounds and has lifted 508 pounds from the squat position. He played with the British Columbia Lions that won the Canadian Football League’s Grey Cup championship in 1994. He finished his professional career with the Saskatchewan Roughriders in 1995.