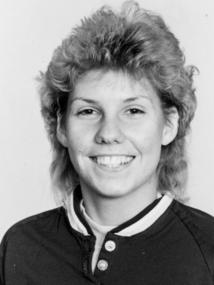 Beth Bull was a three-sport athlete at Bridgeport High School, where she graduated in 1985. The sport of softball was where she was most dominate as she collected All-White Pine Conference honors three consecutive years. As a sure-handed shortstop, she sported an outstanding .944 fielding average, had a career .393 batting average and owns the school record for runs-batted-in in a career with 74. As a senior, Beth was named to the Class A All-Area team as well as the Saginaw News Dream Team, and Honorable Mention Class A All-State, batting .433 with one strikeout in 104 at-bats. As a member of the 1986 DeWyse & Sons Class A National Champion Women’s Fastpitch Softball team, she was named to the All-Tournament team. Beth had an outstanding career at Central Michigan University from 1987-90 where she earned All Mid-American Conference honors all four years. As a junior, she hit .358 with six triples and 25 stolen bases, and batted.344 with 11 triples and 34 stolen bases her senior year. At the time of graduation, she held Chippewa records in base hits (240), runs scored (134), stolen bases (98) and triples (23). She still holds the career record for triples, and is second in at-bats (715), hits and stolen bases and is in the top 10 in games played (216) and batting average (.336). Beth was selected All-Region three times and was a second team All-American in 1989 and a third team pick in 1990. She was inducted into the Central Michigan University Athletics Hall of Fame in 2003. She was also a member of one of the most successful teams – regardless of sport – in CMU’s long and storied history. Central Michigan’s 1987 squad finished fifth in the Women’s College World Series and won a fifth Mid-American Conference championship in a six-year span, finishing 37-14. The Chippewas went 5-0 that season against teams ranked in the top 20, and then dramatically knocked off Northwestern in a best-of-three NCAA Regional to earn a berth in the Women’s College World Series in Omaha, Nebraska. The team was inducted into the CMU Athletic Hall of Fame in 2018. Beth has two grown children, Kelsey and Jake, and currently resides in Eaton Rapids with her husband Jeff. She works for the Michigan Department of Treasury as a Department Specialist.