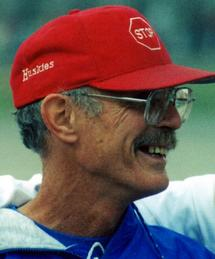 Bill Agresta was born on March 31, 1939, in Massena, New York. He graduated from the University of Notre Dame in 1960, and shortly afterward began a teaching and coaching career which spanned 47 years. Agresta began his coaching legacy at Saginaw St. Mary Cathedral High School, where he coached the varsity football team to a 31-24-1 record with three Valley Parochial League championships. He also coached the varsity basketball team to a 41-12 record in three years at the helm. He then went to Hemlock High School where he compiled a 64-11 and three Central Michigan League titles coaching varsity basketball. His 1973-74 squad had a perfect 20-0 regular season record. Agresta later became known as one of the top cross country coaches in the states, leading the Huskies boy’s cross country teams to 11 conference titles, eight Saginaw County championships, eight regional titles and back-to-back state championships in 2001 and 2002. His girl’s cross country team won five league titles, 11 Saginaw County championships and a second-place finish at the state meet. Agresta also coached Hemlock’s girls’ track and field team to a state championship in 1995 and a runner-up finish in 1996. Another way in which he supported students was in raising money for student scholarships. He helped administer the Roger Hansen scholarship for cross country runners. Agresta also started the Peg Munger Scholarship Fund in 1991, collecting pop cans to raise money to help Hemlock students with college expenses. He added the Bill Agresta Scholarship Hustle – better known in the Hemlock community simply as “The BASH.” The BASH was a road race began in 2007 to help with the Munger fund and the races have raised more than $150,000. A new scholarship – Bill Agresta’s Hemlock Legends Fund – has been established through the Saginaw Community Foundation. Agresta was an avid marathon runner himself, documenting all of his times and races. From March 13, 1974 to November 27, 2018, he logged 89,969 miles and only a bum hip stopped him from running. His longest run came in the summer of 1984 when he ran from the Phillip Hart Plaza in Detroit to the McDonald’s Restaurant on Dixie Highway in Bridgeport. He covered the 97.6 miles in 16 hours and 28 minutes. The two Hemlock cross country state championship teams he coached were inducted into the Saginaw County Sports Hall of Fame in 2017. Agresta passed away on May 31, 2020, after a short illness.