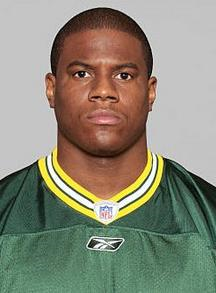 Roy Manning Jr. was an exceptional all-around athlete at Saginaw High School, where he lettered in football, basketball, baseball and track and field and as a senior in 2000 was named Male Scholar Athlete of the Year. As a junior he led the Trojans’ baseball team with eight home runs. Manning was a member of SHS’s basketball team that advanced to the state semifinals in 2000. He was a member of the Trojans’ 1999 state champion football team as a stellar two-way performer. The 6-foot-2, 245-pound linebacker received a football scholarship to the University of Michigan, where he lettered all four years (2001-2004). He played in 37 games during his Wolverine career, starting in 10 contests his senior year when he won the team’s Roger Zatkoff Award, given to the team’s best linebacker each season. Manning racked up 72 tackles for Michigan, including nine for loss, while registering three sacks. In the Rose Bowl game against Texas he recorded three tackles, one forced fumble and one pass breakup. Manning went undrafted in 2005, but signed an NFL contract with the Green Bay Packers that year. He split time with the Houston Texans and Buffalo Bills in 2006 and the Jacksonville Jaguars and Cincinnati Bengals in 2007, before retiring. He appeared in 21 games and his best season was with the Packers when he played in 15 games – starting 2 – making 41 tackles, including 21 tackles on special teams. In 2010, he was a Graduate Assistant at the University of Cincinnati. The following year Manning was a Graduate Assistant for the University of Michigan, before returning to Cincinnati in 2012 to become the team’s running backs coach. Manning then became one of the most sought-after coaches in the nation. He was named the University of Northern Illinois’ running backs coach, and then served as Michigan’s cornerbacks’ coach from 2013-14. Manning’s stock rose in major college football as he was named linebackers coach at Washington State University, where he worked from 2015-17. In 2014, the year before Manning arrived at Washington State, the Cougars ranked 99th nationally in total defense, 127th in pass defense and 127th in turnovers gained. In 2017, they ranked 16th in total defense, ninth in passing defense and nine in turnovers gain. Washington State also allowed only 11 touchdown passes in 2017, tied for fifth-fewest in the country. And its 103 tackles for loss were tied for eighth-most nationally. WSU’s 2017 pass defense also ranked first in the league and its run defense was fourth overall. The Cougars surrendered the fewest opponent first down per game of any Pac-12 team and owned the lowest opponent third-down conversion rate. He spent one year as outside linebackers and special team’s coordinator at UCLA before his coaching journey continued when he was hired by the University of Oklahoma to be its cornerbacks’ coach. Last year, under his direction, the Sooners’ cornerbacks played a big role in OU improving from 114th in total defense in 2018 to 38th in 2019, and from 130th in pass defense in 2018 to 58th in 2019.