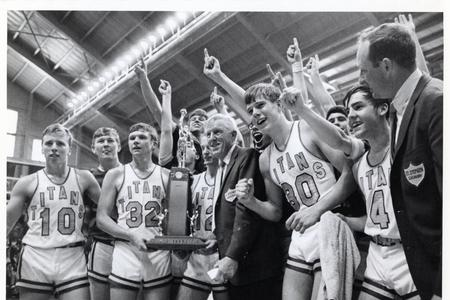 St. Stephen’s High School opened its doors in Saginaw for the 1963-64 school year. Leo “Sam” Franz was hired to build the school into a parochial powerhouse in boys’ basketball. And that, he most certainly did. The Titans, always known for its hustling full-court press, made it to the Class C state championship game in 1967-68 where they suffered a one-point loss to Detroit All Saints, 56-55. With the bulk of that team returning, the Titans had lofty goals for the 1968-69 season. St. Stephen’s averaged a remarkable 88.87 points-per-game (prior to the 3-point line) and allowed just 55.8 to finish the regular season with a 16-0 record and the Valley Parochial League championship. In its first game of District play, the Titans faced Bay City West Catholic and pulled out a 67-60 victory. St. Stephen’s then trounced Midland Dow by 32 points, 85-53, before pulling off a come-from-behind 63-52 win over Carrollton to nab the District title. In Regional play, the Titans knocked off a tough Frankenmuth squad, 75-62, before rocking Merrill 82-64 for the Regional crown. St. Stephen’s, now 21-0 and sporting the longest winning streak in the state, tripped up Manistee Catholic Central 74-68 in a tight Quarterfinal contest. It was then on to the Lansing Civic Center, where the Titans took on Houghton in the Semifinals. When the smoke cleared, the Westside Saginaw squad corralled a 52-47 win. St. Stephen’s then took on Grosse Pointe St. Paul in the Class C state championship game. It was a close ball game throughout and the Lakers held a 43-42 lead with just one- minute remaining in the contest. That’s when Ric Lawler took matters into his own hands. After connecting on two free throws, he made two dramatic steals and subsequent buckets to help the Titans forge a 48-43 lead and ultimately the state title. Lawler racked up All-State first team honors from the Associated Press, United Press International, and Detroit News, and was a Detroit Free Press second-team pick. Additionally, he was selected to the All-Tournament team made up of players from all four classes. His frontcourt partner, John Couture, was also an Associated Press first team All-Stater, while grabbing honorable mention laurels from the UPI. Pete Miller, the 6-4 sophomore center, was an honorable mention pick from both the AP and UPI. St. Stephen’s dominated the All-Valley Parochial team with Lawler and Couture named to the first team, Miller and guard Robbie Armstrong were second team selections, and guard Dave Franz was an honorable mention pick. Other team members included Bruce Cady, Mike Emmenecker, Rick Franz, Brock Howard, Jim Maine, Ed Scales, Bob Sonntag, and Tim Wideman, and Tracy Webber and Mike Zuckschwerdt were brought up from the junior varsity for the tournament run. Sam Franz, who passed away in 1990, was inducted into the Saginaw County Sports Hall of Fame in 2004 after compiling a career coaching record of 526-196. His assistant coach was Hubert “Hub” Lynch.