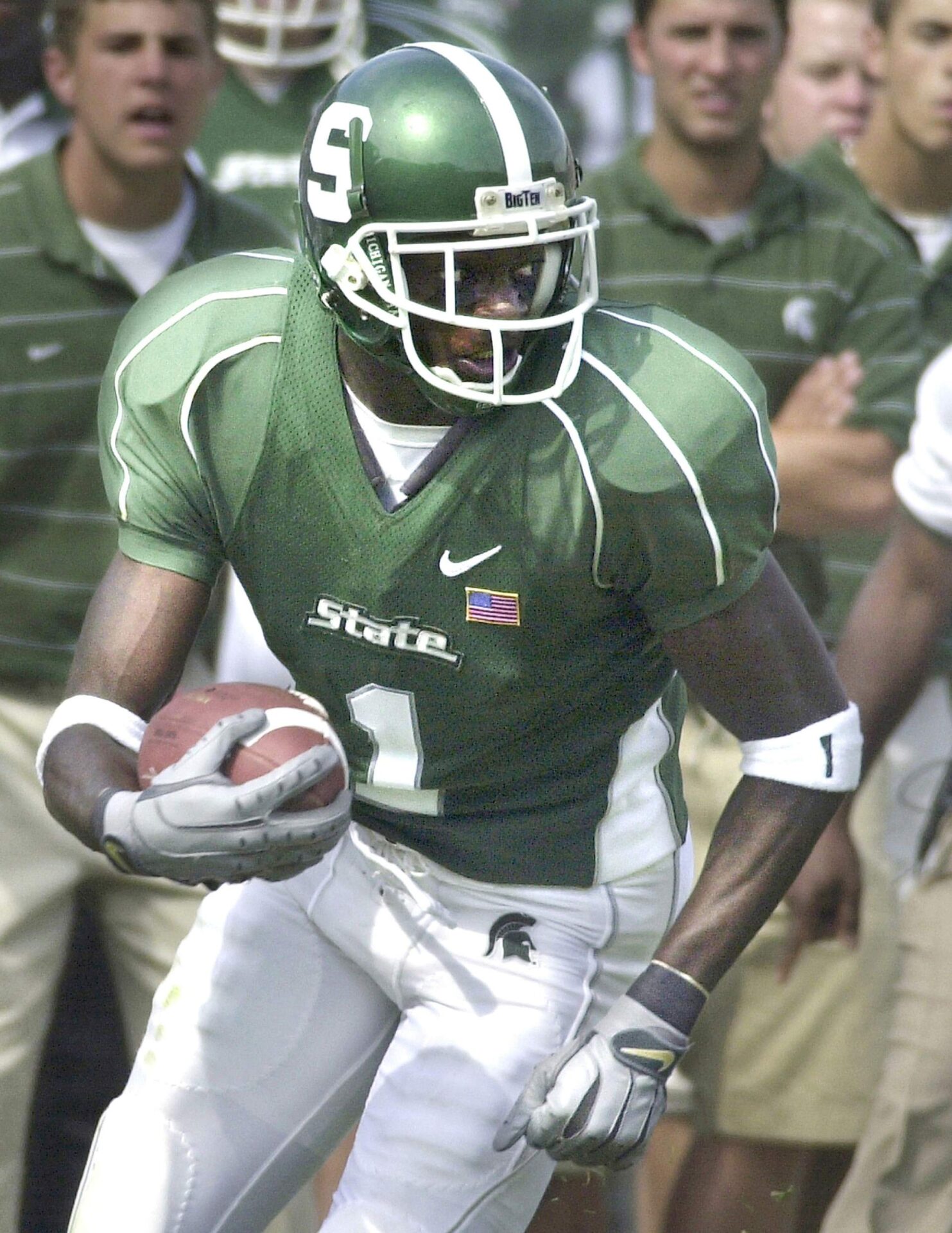 Charles Rogers finished his high school career as one of the most dominating athletes in Saginaw County history, starring in football, basketballand track. The 2000 Saginaw High graduate started on the basketball team, adding four state titles in track, claiming the 100-meter title (:10.70), 400-meter title (:47.82) and two 200-meter championships (:21.67 and :21.30). He helped lead Saginaw High to the 1999 Division 2 state championship, catching a 60-yard pass in a 14-7 win over Birmingham Brother Rice. In his four seasons on the varsity, Saginaw High was 38-8. He earned all-state honors his final three seasons, becoming one of the top recruits inthe country his senior season. The 6-foot-3, 202-pound receiver went to Michigan State, where he was a unanimous All-American pick,claiming the Biletnikoff and Warfield Awards as the top college receiver in the country in 2002. In just two seasons, Rogers set the Michigan State record for career touchdowns with 27, adding the MSU record for most receiving yards in a game with 270. He broke Randy Moss’ NCAA record with 13 consecutive games with a touchdown catch. His two seasons –2001 and 2002 –set MSU records as the top two in school history for yards and touchdowns. In 2001, he caught 14 TD passes and 1,470 yards. He followed with a 2002 season that featured 13 touchdown catches and 1,351 yards. The Detroit Lions took Rogers with the second overall pickin the 2003 NFL Draft, and the pick paid immediate dividends. In his first five games, Rogers caught 22 passes for 243 yards and two touchdowns, recording at least four receptions in each of his first five games. But before the sixth game of the season, Rogers and Detroit cornerback Dre Bly were involved in a collision during practice, breaking Rogers’ collarbone and ending his season. After going through rehab during the off-season, Rogers came back in 2004. But on the third play of the season –and firstpass of the season –Rogers dove for a Joey Harrington pass, once again breaking his collarbone. In 2006, Rogers came back and caught 14 passes for 197 yards and a touchdown. After the season, the Lions released Rogers, whose 40-yard time dropped to 4.8 seconds from 4.4 seconds. He had workouts with Miami, New England and Tampa Bay but was not signed. Rogers died Nov. 11, 2019 at the age of 38. Rogers, who lived in Fort Myers, Florida, was diagnosed with cancer and was awaiting a liver transplant.