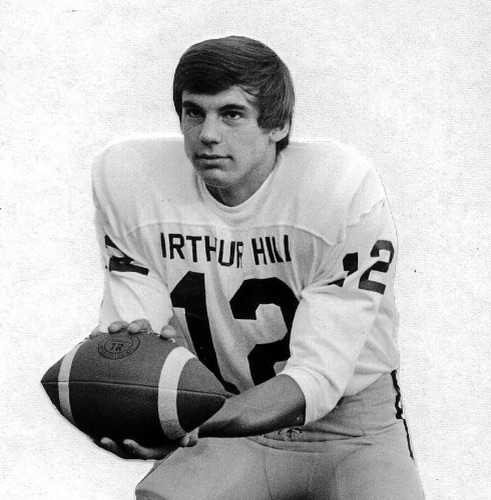 RonRummel turned myth into reality at Arthur Hill High School, quarterbacking the Lumberjacks to perhaps the greatest football season in Michigan high school history.In 1973, Rummelled Arthur Hill to an undefeated and unscored-on season, with the Lumberjacks outscoring their opponents, 443-0, and claiming the mythological Class A state title. Rummel was named the Saginaw Valley League Most Valuable Player and Associated Press first team all-state for Class A. HE finished third in the state in the Michigan Player of the Year voting.During his time at Arthur Hill, the Lumberjacks’ varsity was 17-1, earning a scholarship at Central Michigan University. Rummel’s three years on the varsity were CMU’s first years as an NCAA Division I program. He was a freshman on the 1974 CMU Division II national championship team. During his career, Rummel threw for 1,993 yards and totaled 2,920 yards of total offense from 1975 through 1977, throwing for 14 touchdowns with just eight interceptions. His quarterback rating of 119.5 ranks in the Top 10 in CMU history. He also ran for 150 yards and 12 touchdowns.During his time at CMU, the Chippewas were 37-8-1, giving Rummel just nine losses in high schooland college combined. Rummel died in 2018 at the age of 61 after a six-year battle with cancer. He and his wife Alison have three daughters: Chelsea, Kaja and Hannah.